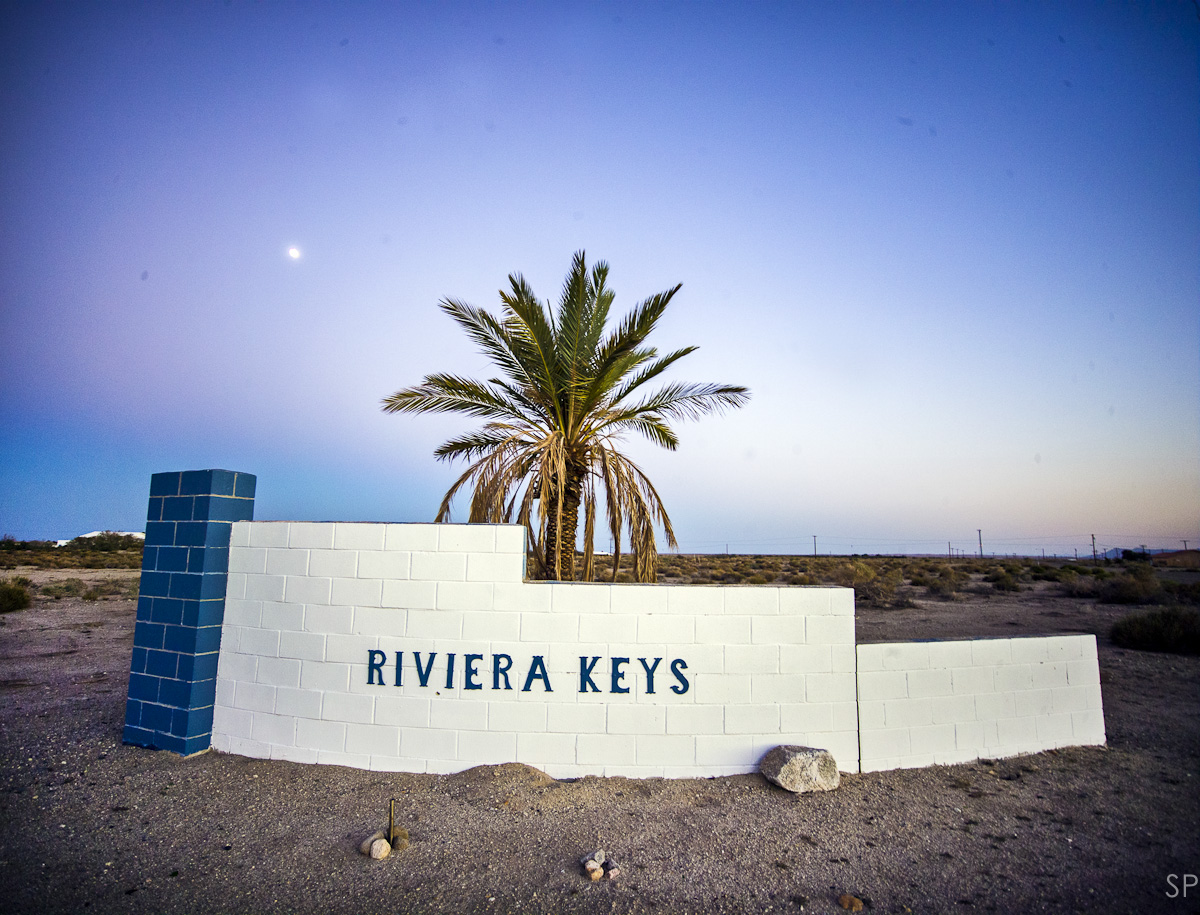 Left Orange County AM, headed directly to Salton Sea, west side. Scout out Desert Shores, Salton Sea Beach, and Salton City during day for locations to shoot in better light. Focus on Salton City and abandoned half-built homes, as well as signs for communities and canals that have dried out. Looking for signs of damage or cracks in the mud that are graphic as a result of the heavy monsoon rains three weekends ago.

Saw a sign at Salton Sea Beach that said Bingo thurs 10-2 at desert shores RV park? Check sign. Might be interesting to photograph a bingo event, especially since its inside and potentially air conditioned when it is so hot out.

Found half-built homes that were stopped in 2008-2009 due to financial crisis. At that time there was a moderate housing boom in Salton City, a rebirth of sorts. Boom and bust cycle stopped a few under construction. Interesting that the recession is felt in a place like the Salton Sea, where its had recessions upon recessions.

Full moon rising in afternoon and at dusk.

Temperature 106 degrees, making is more difficult to focus due to heat.

Went to Captain Jim’s bar to see if there was anyone to photograph, two people inside so I did not engage.

Found best route from home to Salton Sea Beach area, takes about 40-50 minutes depending on traffic and lights vs. the hour it used to take. Helpful for timing sunrises on early mornings so I am not sitting around in the dark.

Routing is Airport Blvd East, cross over Highway 111, and take ramp onto Highway 86 south, take to Mecca travel stop, and can either head down west side of the Sea on 86, or head East to Mecca and 111. This route avoids going through residential areas or down the congested stretch of highway 111. Another advantage is that the travel stop for gas, food, ice, and coffee is now at the beginning of routes to both sides of the Salton Sea. However must have cash or debit card since it is an Arco and does not accept credit cards.

Went to Salton Sea beach at 430 AM to photograph stars after the moon set at 330 AM and photograph into the 630 AM sunrise from the West side of the sea.


Photographed abandoned motel and trailer with its side ripped off, as well as burnt out house on shore. I think I’ve photographed this area enough during the day and sunrises, better to focus on people or photographing at night in this area, or diversifying where I shoot, as in more remote areas.

After sunrise hiking back to my car I ran into recent transplant resident of Salton Sea Beach John Edmond at about 7 am walking his dogs on the ridge/dike that separates the dry part of Salton Sea Beach from the mud and recently dried mucky area that makes up the beach in the area.

I call this area between dry land and the actual water the “Salton Suck,” because it is a muddy organic layer of decaying fish parts, clay like mud, and bones that literally suck your feet in. It’s the consistency of peat or clay. Even wearing boots the mud will pull the boots right off your feet. Local rumor has it at an 18 wheel truck once sank into the Salton Sea shore in the area, after a trucker parked overnight too close to the mud.

Edmond was walking four different dogs, so we got to talking and he explained he rescues dogs and helps them find homes. There are stray dogs in the Salton City area, and I have seen them numerous times at gas stations.

An older, potentially retired man, Edmond said “People know that I love dogs when they find them they bring them to me.” Edmond has lived in Salton Sea Beach for the last year, making him the only older resident I can remember that has willingly moved to retire in Salton Sea Beach. He apparently has his own gated compound.

As we chatted Edmond elaborated on some of his neighbors, confirming suspicions that I’ve long had of the Salton Sea Beach community

“See that trailer coming in over there?”, as he pointed west towards the mountains and trailers lining the coast. “It's a drug den. People in and out all day buying drugs. I've called the police but they say they can't do anything without catching them in the act.” (Written verbatim as he spoke).

“Well I say how are you going to catch them when you are sitting around?  The police just come through and drive around and leave. The tweakers just take the advantage of it.”

Edmond went on to elaborate that drug dealing and use occurred in the Salton Sea Beach area, but that due to apparent lack of police resources or apathy, nothing was being done about it. He painted the retired senior citizens in the area as victims of the growing population of “tweakers” taking advantage of lack of law enforcement and remoteness in the area. Edmond even claimed that they stole water bowls he placed outside for his dogs.

Despite the hot weather I was able to focus on the more populated western area of the Salton Sea and improve upon some photos I’ve made in years past. Now they are more current, done under the project, and in better light with better composition. Its difficult to find people out and about during the day, and it seems the best chance for interaction is during the early mornings and evenings when it isn’t as hot. However, there are less people in the area, period.

I was able to find a better route from my parents house out to the Salton Sea, making a long drive each way a bit easier. I learned that Salton Sea Beach is indeed awash in drug use and dealing, and that I need to be very careful there. For the time being I’ve suspended photographing in the area at night unless I am with someone else.

Overall, the images are looking like they will be more photographing what is there and decaying versus a narrative story of people in the area. Its hard to find consistency with the people who live there due to the periods of time between when I am returning to the Salton Sea.

In other news, I broke down and spent $600 on a DJI Phantom Quad copter to use for drone footage at the Salton Sea. Unfortunately on its third test flight  in Newport Beach it crash landed into pool and is most likely destroyed. There’s a small chance I can get it fixed but the drone part is most certainly grounded now. I also have lost numerous field days because of the expense of the drone, that would have otherwise gone to the food and fuel budget. At least I tried. I simply don’t have the time now between working and photographing to work on the drone part. Id rather focus on core image making and the professional component than chasing around aerial footage. Perhaps in the future.